Less than 48 hours before oil giant Chevron’s shareholder meeting, activists from Amazon Watch and our allies at Rainforest Action Network (RAN) have rappelled from the deck of the Richmond Bridge over the San Francisco Bay to hang a 1500-square foot banner proclaiming
“Chevron Guilty: Clean Up the Amazon!”

Activists from RAN and Amazon Watch are dangling from the massive banner – which is anchored to the bridge deck – creating a spectacular sight adjacent to Chevron’s polluting refinery in Richmond, CA.

As Chevron escalates its abusive tactics to evade accountability in Ecuador, supporters of the communities in the Amazon are escalating their efforts in solidarity with the men, women, and children who continue to suffer the toxic legacy of the oil giant in their rainforest lands.

“I’ve seen with my own eyes the devastation Chevron caused in the Ecuadorian Amazon, and it’s long past time for the company to clean up its toxic legacy there,” said Thomas Cavanagh of Amazon Watch. “And until Chevron does the right thing, we will stand with the Ecuadorian communities fighting for justice.”

You can help support the delegation, too. Please join our Facebook Cause today!

It was exactly one year ago today: a terrifying explosion, flames engulfing an offshore oil rig, 11 men dead. The beginning of one of the most horrifying environmental tragedies in US history – BP’s oil disaster in the Gulf of Mexico.

Today, as part of international “No Drill Day”, Amazon Watch celebrates the dignity and courage of frontline communities around the world who are fighting to create clean and healthy environments. From the Gulf Coast to the Niger Delta to the Amazon rainforest, people are standing up for alternatives to reckless oil drilling.

In that spirit, we’d like to share a glimpse into the life and culture of the courageous Achuar people of the Pastaza and Morona river basins in the Peruvian Amazon, who have succeeded for decades in keeping oil drilling out of their ancestral territory.

Watch a video on life with the Achuar and sign the global petition!

The relentless pursuit of oil has reached the remote Peruvian Amazon and now the Achuar people find their way of life threatened by yet another oil company, Canada’s Talisman Energy. But the Achuar are standing up for their rights, and are united in steadfast opposition to Talisman’s planned expansion of oil operations into their ancestral territory.

On “No Drill Day”, stand with the Achuar by sharing this story on Facebook and Twitter and signing the petition to Talisman. We have a chance to prevent yet another oil-related tragedy from occurring.

Free online magazine for  citizens of planet earth. Check it out http://www.liveencounters.net 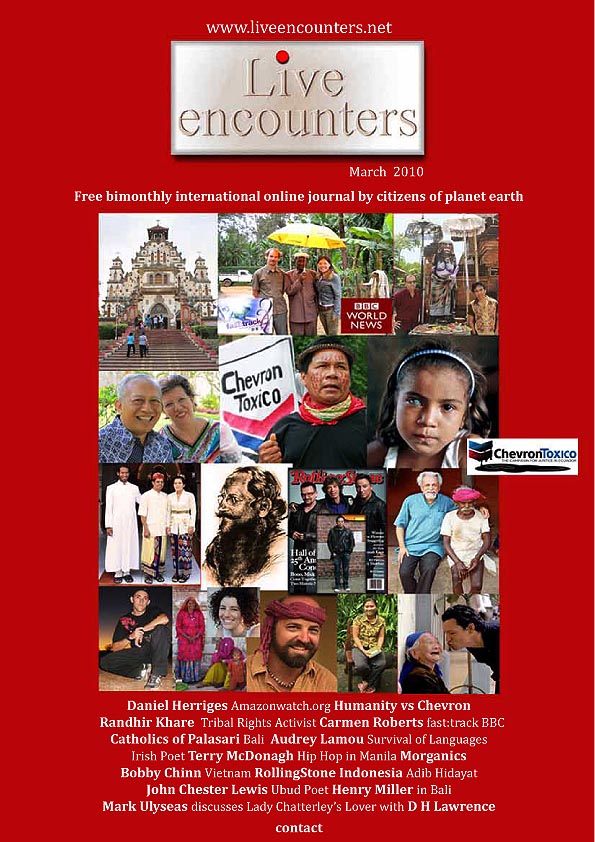