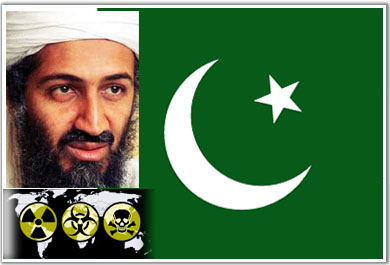 Pakistan: A Terrorist State with WMD

It is now confirmed beyond any doubt that Pakistan is a safe haven and breeding ground for terrorists, their organizations, launch base for terror attacks in USA, Europe, Middle East (Israel), Russia, Afghanistan, India, China, Indonesia, etc.

Pakistan’s half million strong army is a support group for supply of arms, bombs and logistics for terror attacks in other countries. It’s intelligence agency, ISID aka murder incorporated specializes in murdering innocent unarmed civilians in many countries; basically an agency of thugs and assassins.

Pakistan is a nuclear State that ‘often reminds’ the USA of its arsenal. A bluff that usually has the desired effect – more dollars to ‘fight’ terrorism. These dollars are shared between corrupt Pak Army officers, ISID, Corrupt Pak Govt. officials and ‘donated’ to terrorist outfits, some of whom wage with India.

The bogey of India at its border has historically been used in domestic politics and Pak Army machinations to get cash handouts/arms from USA and China.

The field data collected and collated by : US Forces, RAW/Indian Army, KGB, Chinese Intelligence Agencies, Israel/ Mossad, Indonesian Intelligence Agency, etc.; And the killing of Osama Bin Laden in the heart of Pakistan has confirmed what the world suspected – Pakistan is a Terrorist State with weapons of mass destruction – a country that has exported WMD to North Korea, Iran and supplied a “dirty nuclear bomb” to Al Qaeda.

It is time to put an end to the butchering of innocent unarmed civilians and mindless acts of terrorism. It is time to call out the dogs of war to settle this problem once and for all.

Terrorists working/operating internationally from the sanctuary of Pakistan

Will the USA continue to supply money and arms to Pakistan?

Will China look the other way while attacks by East Turkestan’ terror forces continue on its territory?

And will India continue to voice its concern without taking any military action?

It is time to put an end to the butchering of innocent unarmed civilians and mindless acts of terrorism. It is time to call out the dogs of war to settle this problem once and for all.