Thank you J & K Police for identifying those that threatened and abused the all woman Kashmiri girl band, Pragaash. Now catch them and prosecute them to the full extent of the law… 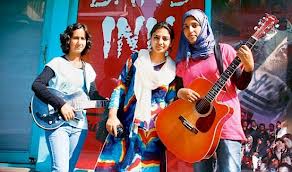 The 10th-class students — vocalist-guitarist Noma Nazir, drummer Farah Deeba and guitarist Aneeka Khalid — had formed a band “Pragaash” and performed in December last year with a scintillating performance at the annual ‘Battle of the Bands’ competition in Srinagar and won the best performance award in their first public appearance.

During a debate with IBN18 Editor-in-Chief Rajdeep Sardesai, Shabnam Lone said, “The Mufti has given a fatwa, is he a Constitutional authority? He is not. Now why were the things allowed to go far beyond the point where these girls are in hiding now?”

The band on Monday decided to quit after a fatwa was issued against them by the valley’s Grand Mufti, Bashir-ud-Din, who said that women must live in purdah at all times. Blaming women for the increase in crimes against them, he said that women must desist from performing in public as otherwise, there will be no difference between “our women and film actresses”.

An angry chief minister Omar Abdullah told CNN-IBN that the fatwa is against spirit of Kashmiriyat and promised full security to the girls if they wish to continue singing.