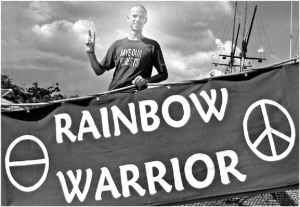 “There is a prophecy from the First Nations of America that there will come a time when the earth will become sick, its waters polluted and the skies full of smoke and at that time there will rise up from all around the planet warriors and they would be known as the Warriors of the Rainbow. They will fight the forces destroying the earth and return all that has been plundered from it. We hope these warriors would also come from Bali,” said Mike Fincken, skipper of the Greenpeace boat, Rainbow Warrior, to me when we met last December in Bali.

This is the second boat of the same name. The first one was blown up by the French Authorities to prevent Greenpeace from protesting the nuclear tests in the Pacific.

In December 2007, nations gathered in Bali to confabulate and agree upon a strategy to prevent the further destruction of the earth by wanton pollution. It was grandly called the UN Climate Change Conference. I didn’t attend the jamboree. But I did get an opportunity to board the Rainbow Warrior anchored at Benoa harbour to speak one on one with the captain, Mike Fincken.

He agreed to my request for an interview of sorts provided he spoke in his personal capacity and not as the official spokesman for Greenpeace. I was only too happy to share a cuppa with him while he showed me around the boat.

The ensuing encounter brought back memories of the Sunder Bans and the savage rape of its fragile eco system. Afraid of reliving this reality that one had ‘left’ behind when recording Mike’s utterances for posterity, I filed this story under the heading miscellaneous hoping to return to it at another time; And what better time than now when plastic waste continues to clog and pollute the rivers and sea shores of Bali – the island that breathes a beautiful life into all who arrive at its doorstep.

Mike, as he prefers to be called, has been sailing the Rainbow Warrior for the last two years. He has worked a total of 12 years with Greenpeace. Being a pacifist South African when Mandela was incarcerated in jail on Robin Island, he went to sea to avoid the compulsory conscription then in force.

As head of operations on a cargo ship loading lumber in Vancouver he began wondering as to source of the wood and the resultant destruction of pristine wilderness wrought by mindless logging. This ignited an interest in environmental groups and their actions and brought Mike in contact with Greenpeace and in particular its maritime service. He began a correspondence with their office for two years while at the same time completing the mandatory 10 years sailing to obtain certification of Master Mariner. In 1996, he resigned his job and at his own expense flew from Cape Town to Amsterdam, the HQ of Greenpeace to volunteer his services. He was assigned to a boat called Moby Dick without salary but board and lodging.

“An unforgettable and humbling experience has been sailing in the south sea of Antarctica… on display Nature in its purest form, untouched and virginal… The vast whiteness and untamed wilds with lots of Orcas and hump back Minkes frolicking in the sea… Sunrays refracting on the ice creating mini rainbows…the mesmerising sparkle of light in many hues of pinks, blues and reds. Alas, every time we return on our annual visit we have to sail further and further south to reach the main ice lands as global warming has affected the South Pole by slowly melting the ice cap. This is the result of what we are doing to our planet, our only home. Do you know that two thirds of climate change is the direct result of energy production? We need to promote alternative sources of energy like solar power,” lamented Mike.

I asked him about the Japanese whaling fleets, how and why they killed whales for scientific experiments and how Greenpeace has often successfully stopped them from slaughtering whole podss.

He told me that when the Japanese whaling fleet locates a pod of whales they fire harpoons that strike the whales and explode inside their bodies immobilising them. When a whale has been hit the others, on hearing its distress calls, gather around to comfort it. This is when a number of them are also shot. The sea turns red with blood to the wailing song of the gentle giants of the oceans. Then the fleet moves in and secures each whale by the tail with rope hauling it tail first onto the boat. As the profusely bleeding whale is still alive its head is left under water for a while so that it drowns.

Mike has been on many missions with his associates riding the choppy seas in motorised rubber boats to act as a shield between the whales and the fishing fleets. The danger of exploding harpoons does not deter him. I suppose the cost of one human life for the sake of the survival of a species is a small price to pay.

On the other hand the Japanese also conduct scientific experiments. For instance, they annually measure and record the size of the stomach of a number of whales. Apparently the condition and size of the innards is a barometer of the state of the environment. For instance, it has been known that whale stomachs have been shrinking over the years. This is because their staple food, Plankton, is diminishing primarily due to global warming that is destroying the ozone layer and letting in harmful UV rays that affect the growth of Plankton. The truth is that more whales will die due to the effects of global warming than by exploding harpoons.

During the Climate Change Conference, the Indonesian Minister for Environment launched, from the Rainbow Warrior, the government’s program; “Energy Efficient Bali 2008 – Switch off, unplug and enjoy”. (What progress has been in the last nine months is anyone’s guess). Mike firmly believes that such a program will be successful if each one of us takes on the responsibility as an individual. And this could start by every person doing his or her small bit like not littering, picking up plastic waste and conserving energy by unplugging appliances not in use.

With the arrival of another round of coffee, the skipper spoke emotionally about his small home in South Africa and how his interest in the environment began after he took a course in organic vegetable farming: tilling the soil with his bare hands, feeling the moist earth and discovering the many tiny creatures like earthworms and beetles in his small garden. It sensitised him to the value of all life.

And yes Mike is a vegetarian and so are two thirds of his crew. He told me that the Rainbow Warrior is like a floating United Nations as the crew of 15 came from 13 countries.

At the end of the enlightening meeting, the skipper handed me a signed message from him to all who dwell on this isle. It is included as an insert in this column. Let us cut it out and keep it in our wallets as a constant reminder of our duty to preserve this paradise.

It has been suggested that we can begin by first banning plastic bags on Bali and then clearing the plastic waste that is defiling this sacred isle of the gods. 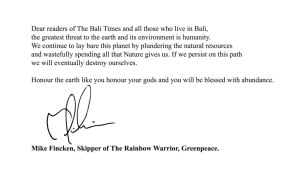