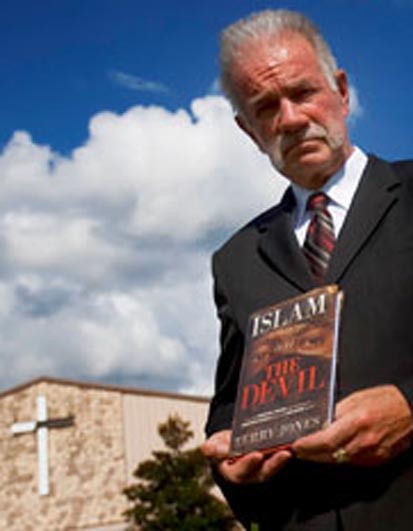 Pastor Terry Jones and Wayne Sapp, you are not Christians!

The Lord Jesus Christ spoke of Love and Peace.
By burning the Qur’an you have disrespected Christ and all His followers who believe in His Words.
Your mindless, criminal and disrespectful action  has caused the horrible murders of UN workers in Afghanistan.

“The United Nations mission in Afghanistan has been plunged into jeopardy after protesters enraged by the burning of a Qur’an by Christian extremists in the US stormed a UN compound in the north of the country and killed at least seven foreign staff members.

Amid uncertainty about the overall death toll, the UN said its staff were killed when the usually peaceful city of Mazar-e-Sharif exploded into violent protest.

Four of the seven foreigners killed were former Gurkhas working as private security guards. Norway’s defence ministry named another victim as Lieutenant Colonel Siki Skare, a 53-year-old female pilot working for the UN, while the sixth victim was named as Gurkhas 33, a Swede working in the UN office. The seventh foreigner killed was believed to be Romanian. Two of the UN workers were reported to have been beheaded.”

Pastor Terry Jones and Wayne Sapp you are cowards. If you wanted to burn the Qur’an why didn’t you do it in a Muslim country like Egypt? If you are so angry with the Right Wing Muslims go fight them face to face.

Why burn the Quran in the safety of your own county?