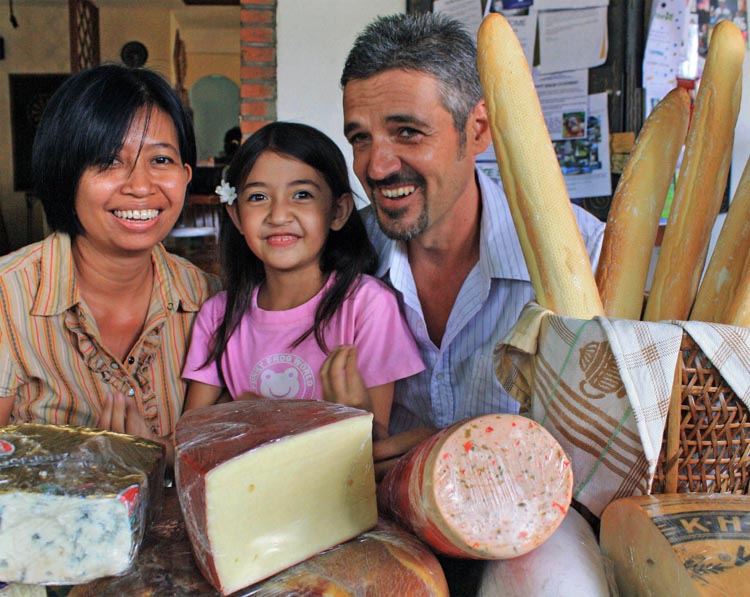 This is about the expat community in Bali – The world within worlds that segregates the lotus eaters from a reality that most islanders have to deal with on a daily basis – navigating through the potpourri of cultures. Many naive expats have to tread the minefield of religion, rituals and social customs that is so far removed from their own that coherency in everyday life is often achieved by hitching up with an Indonesian in matrimony. The conjugal connection sometimes results in the birth of a Mom & Pop business that incorporates a new found sensitivity and belonging to the adopted country.

I dedicate this month’s column to these wonderful folk who make Bali the Grand Central of Cultures.

A few weeks back as I sat in a restaurant fiddling with my laptop keyboard trying to get the keys unstuck after a nubile nymphet had dropped wine on it, I was offered a glass of Grappa by a man who spoke with a thick Italian accent. It’s amazing how liquor bridges all gaps between cultures. He was Roberto, an Italian living in Bali and married to Niken, a gorgeous lady from Java.

“Salúte”, I said raising my glass.

“Salúte”, exclaimed Roberto, “We must look into each other’s eyes when we toast otherwise you get seven years of bad sex”.

“It has been so long, what’s another seven years”, I replied jokingly, “Are you Italian?”

“Yes. My hometown is Laives. It is in the shadow of the Alps. But it’s not really Italian. There’s a curious mix of Italians and Austrians. After the Great War the borders were shifted and part of Austria was added to Italy. There are Italian and German speaking people with two different cultures living side by side. As a child growing up with this weird mix of people I learnt a lot and this has helped me in living with alien cultures. Even our food and clothes are different. It’s like no other place in my country. We Italians are very gregarious, loud and with large families, while the Austrians are a bit formal in all the leather that they wear. I grew up speaking three languages – Italian, German and English. Now, I also speak Bahasa. And what about you my friend?”

I avoided the question and reached for the bottle of Grappa and poured another drink. For the edification of all those Philistines among us, Grappa is an Italian brandy distilled from the remains of grapes after they have been pressed for wine making.

“So how long have you been living in Bali?” I asked.

“Around 14 years. Actually I have never planned to come to Bali. Many years ago when I returned to my hometown after a trip to Madagascar some friends approached me and asked me to join them on a holiday to Bali. As one of them had backed out at the last moment, I took his place. It was accident that I arrived here. But it was a fortunate twist of faith. Bali captured my senses and Niken, a beautiful girl from Jogyakarta stole my heart. I married her,” he replied.

Roberto told me how he and his wife had started the restaurant (in which we were sitting) with the idea of offering delicacies from his home country, Italy. Since its inception eleven years ago the outlet has become popular with locals and tourists alike for its range of pizzas, pastas, freshly baked breads and a delicatessen that sells a wide range of cold cuts, cheese, organic produce etc. In fact every Saturday the couple let out part of the restaurant for half a day free of cost to the organizers of the Organic Farmers’ Market to hold their weekly sale of fresh farm produce.

“Do you see any noticeable difference between the eating habits of Italians and Indonesians?” I asked.

“For us (Italians) meals are a celebration in which the whole family takes part. But the local people here eat alone with no fixed time for meals; it is like they are just putting food in their mouth impassively,” he said.

“And what about the women, what’s your take on their contribution to the family?”

“The Indonesian woman knows her place in the family and society. She is instilled with family values. I think this is called Mengabdi. Whereas, the Italian woman has lost it, probably that’s why men from my country look for young brides from the East European Countries,” he replied.

“Do you think religion is a barrier between you and your wife?”

“No, because we are both Catholic. However, after staying in this country for so long I do believe that religion creates divisions between peoples and cultures.”

“Because if we do not belong to the majority religion we are looked on as outsiders even though we may be part of the community. I do not mean to be critical or disrespectful but this is a fact of life all over the world and I accept it in all humility.”

“Why have you settled in Ubud, Roberto”.

“Please let me answer that”, said Niken as she sat down at our table, “we like the people and more importantly the harmonious culture of creativity that thrives here”.

“Niken, do you think your husband has understood your culture?” I asked

“No, not completely and probably he never will in this lifetime. But then one can absorb another’s culture only when one is a child because the culture adopts the child. Also, why should Roberto adopt my culture? He has brought his own to share with us by way of Italian cuisine,” she replied.

“What about social communication? Is there any similarity?”

“No. Unfortunately I have learnt this the hard way. My husband is a true Italian for he tells people exactly what he thinks to their face, whereas we do it in a roundabout manner so as not to appear insulting. You’re Indian, you know what I mean?”

Just then Vivian, their seven year old daughter walked up to our table and said a few words in Bahasa to her mother. She then turned to her father spoke in Italian to him and ran off with her friends shouting syllables of a language I couldn’t comprehend.

“Niken, what language is your daughter speaking?” I asked

“Balinese. She has picked up a number of words from her friends”.

Roberto poured another round of Grappa for us. We toasted to Bali, to the world and to life.

This is Bali, I thought to myself, in all its glory – a confluence of cultures coming together to make a wholesome picture of all that is good and inspiring.