How many graves of innocents will be dug on Christmas Day?

Trudging along through the rain

In the Nativity scene

Gather around to pray

To the rhythm of the bells

That are tolling for the dead

Knee deep in the graves

Why is Christmas as it is?

When all we have is this

And putting a price on sin

Merry Christmas to our brothers and sisters in Blood.

Merry Christmas to all those dead people who were an integral part of our growing up years; who made past Christmases memorable with their culinary delights, laughter, clinking of wine glasses, warm hugs, messy kisses, smudged rouge lined faces and a happiness far removed from hatred, angst and pain.

Carols sung by family and friends, the Christmas tree blinking in the corner with colorful glittering presents piled at its base ready to be opened by breathless children wearing new clothes and smelling of the sweet joys of Yuletide – all these pictures fading into sepia remain, thankfully, indelible images of the dead who now celebrate Christmas elsewhere!

Let us pause for a moment, fold our hands and send kisses of love to the dead.

Let us embrace in our minds and hearts the remembrances of a time when simple pleasures were greater than wants; when sharing, family and belief were sacrosanct. And then when we sit down to Christmas lunch or dinner or whatever let us talk about them as if they are present.

This is a time for love, peace and happiness. Most often we crave for material things during this festive season – family and other loved ones being together, partaking of forgiveness, devoid of deceit and filled with delightful oneness.

This year we must include our dead and invite them into our homes by hanging their photographs on the Christmas tree along with the bells, stars and angels; And sing hymns with them in our hearts with love and respect.

Those ‘alive’ today will be dead on the ‘morrow’ for the cycle of Life never stops; it’s unrelenting except for Christmas, which is the vestibule that connects the two worlds of living and the dead. It gives us an opportunity to reach out and be touched by the dead who had nurtured our minds and bodies. What we have done with this nurturing is for the dead to decide.

Merry Christmas to all the dead and let the warmth of this season of passion and revelry prevail for ever and ever. Amen.

Incongruity at 7.30 p.m: A few customers, tattooed gentry masquerading as cultured lounge lizards high on aphrodisiacs, listen to the Griya Faria Ubud Reggae Band belt out numbers by Bob Marley and the Wailers.

A short while later, Harts stroll in and head straight for the bar on the far side, some are overheard lamenting the night of rain. Wet. Drenched. The throb of music is warm and like ‘the first kiss’, invitingly moist. The crooner’s lilting voice is punctuated by the intermittent roar of passing motorcycles.

The place reverberates with a sweet emptiness like biting into a macaroon. A red light on a pillar blinks out of sync. The singer mumbles apologies for what he assumes is poor sound quality (which it is not).

A self-conscious couple walks in and glances around furtively to see if anyone is watching them. They cling to one another as if propping each other up.

Incongruity is present and all pervasive.

Miscellaneous reality : Red, red wine is absent thanks to the Powers that Be; Bali is presently running dry as all supplies of liquor have ceased and further replenishment is like a mythical creature…though inferences are made it remains a figment of the imagination.

It’s now 9 p.m and Blue Cat is filling up to the brim with passersby dropping in eager to partake of the seductive jamboree. The boys behind the bar are smiling…shaking the Shakers, slapping on the lemon and dunking the ice cubes into pegs of Arak.

Mutton dressed as lamb gyrates on the dance floor under the adoring eyes of a young man she has apparently just befriended.

We fight for the right to be free…we all sing one song…the song of freedom…don’t worry about a thing…everything is going to be alright.

The show is enthralling as people in all shapes and sizes appear to be doing calisthenics to the thumping Rastafarian rhythms.

The night glides on to Cinderella’s cut-off time and then the band goes silent. Light recorded music wafts through the air as the loud chatter gently fades to a whimper and then dies out.

The year is now pregnant with the New Year…it is expected soon…screaming at the crest of a multitude of change by bringing with it renewed joy, grief and platitudes.

Hopefully the Blue Cat will remain a Terminus for lonely Harts, tourists and assorted expats to congregate thrice a week for a night of pure music, drinks and friendship.

To the Griya Faria Ubud Reggae Band, I say, thank you for the music. 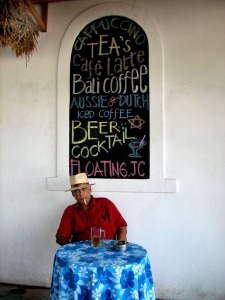 The Mad Hatter will now bombard you with frangipani, serenade you with Kecak and then take you on a guided tour of the subterranean world called Wonderland.

The journey begins through the portals of deluded minds past apparitions of elderly women dressed like teeny boppers. These images assault the senses at every turn of the corner…Halloween the year round.

It is a waistland here. Some sport pot bellies like Vietnamese pigs, other decorate them with rings, beads and tattoos afraid they may misplace their waistland or allow aliens to infiltrate their personal air space.

The plumage of the Wonderlanders range from the conventional (sarongs preciously draped for the right look) to shorts that leave nothing to the imagination…biceps and triceps  in various formats guaranteed to enthrall first time onlookers.

Often one may witness aerial displays of matted tresses riding a two-wheeler and the captivating ‘art installation’ of a comforting cup of herbal tea delicately balanced between filigreed fingers and pierced lips.

However, there are divisions in this society and it is not by age.

Caution: Age should never be mentioned here for retribution is swift – like being bludgeoned by a pork spare rib or worse still by having a baguette strategically placed to give the offender maximum physical discomfort.

Participating in the numerous rituals is essential to becoming a part of the ‘loose talk’ that every now and then creates a flutter among the Harts or elsewhere. In both cases, damage is superficial as the attention span of the perpetrator/s is limited to normally two martinis or four beers. This depends on the generosity of the person footing the bill.

Wonderland society is divided into basically two parts – Haves and Have-nots. The Haves are the seasonal folk who are akin to migratory birds. They roost here for the winter and flee home come summer. The Have-nots are the scroungers who are, in a manner of speaking, limpets that sustain themselves by latching onto ‘various schemes and dreams’ to earn megabucks or money for the next month’s rent.

A sub-division of the Haves are successful business persons who had graduated from Have-nots by tenacity, ingenuity and optimal use of brain power.

In Wonderland one must be prudent not to make genderisations. One cannot always assume that one is speaking to a male or female. Individuality borders on a sublimity that questions the tenets of an ordered society.

Over indulgence is the stream of consciousness which carries endless emotive aspects that constantly erupt all over the land like pimples on a teenager’s face. In essence its adults with raging hormones.

There is always someone, somewhere being verbally vandalized, exonerated or exalted. In fact, every living moment, stone, color or event is analyzed, dissected and bisected to obtain a significant meaning to one’s life. An ordinary day does not exist in this world.

And now to top it all are the culinary concoctions that intoxicate the pheromones and create a mystical rendition of excess and in excess. Every twist and burn generates another reaction to all that prevails in Wonderland.

The rouse to circumnavigate sensibilities always ends in being juxta- positioned between sanity and insanity.

Wonderland is a place that is cocooned in the Universe; everything, everywhere including the denizens remain unique and insular to the bigger picture.

If you are here and now in this place then you are blessed. For nothing is more exclusive in a strange sort of way than being part of this world.

For me Wonderland is the neutrality shelter of co-existence in a swirling world of political and religious intolerance. 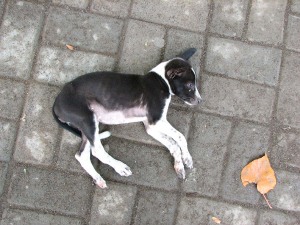 The following love poems are dedicated to three special women who knew and loved me. Thank you for coming into my life.

A part of the day

When thoughts are scrambled

The band vomits a version of Get Back

And leftovers on plates

While a couple dance in death throes

It begins to rain

The dirt, the lies and the hopes

All mingling in the slush

The feeling, touch and belonging

Lost in a haze of cheap perfume and sweat

Manon has left a day before

To frolic in the sun

It is the night of the dark moon

When I am left alone

For the demons to come

To possess my soul

This is not the time to cry

It is the time to die

To burn in passion

And fly away into the night

Love is but an orgasmic trance

From which we emerge

Blinding ourselves with illusions of trust

When all along it’s simply lust

There will never be a hello or goodbye

That surface time and again

To moments of momentary lust

For the mother of my son

Was it love or was it trust?

Was it passion or was it ‘mast’?

How can one say after all those years

Of sharing and hoping and caring for us?

The long silences of tenderness

The sweet breath of an embrace

All erased with just a wave

Who was right or who was wrong

Where was love when we needed it most?

Questions remain of what was true

When all we should have done

Was to be together through and through